We All Scream For Ice Cream 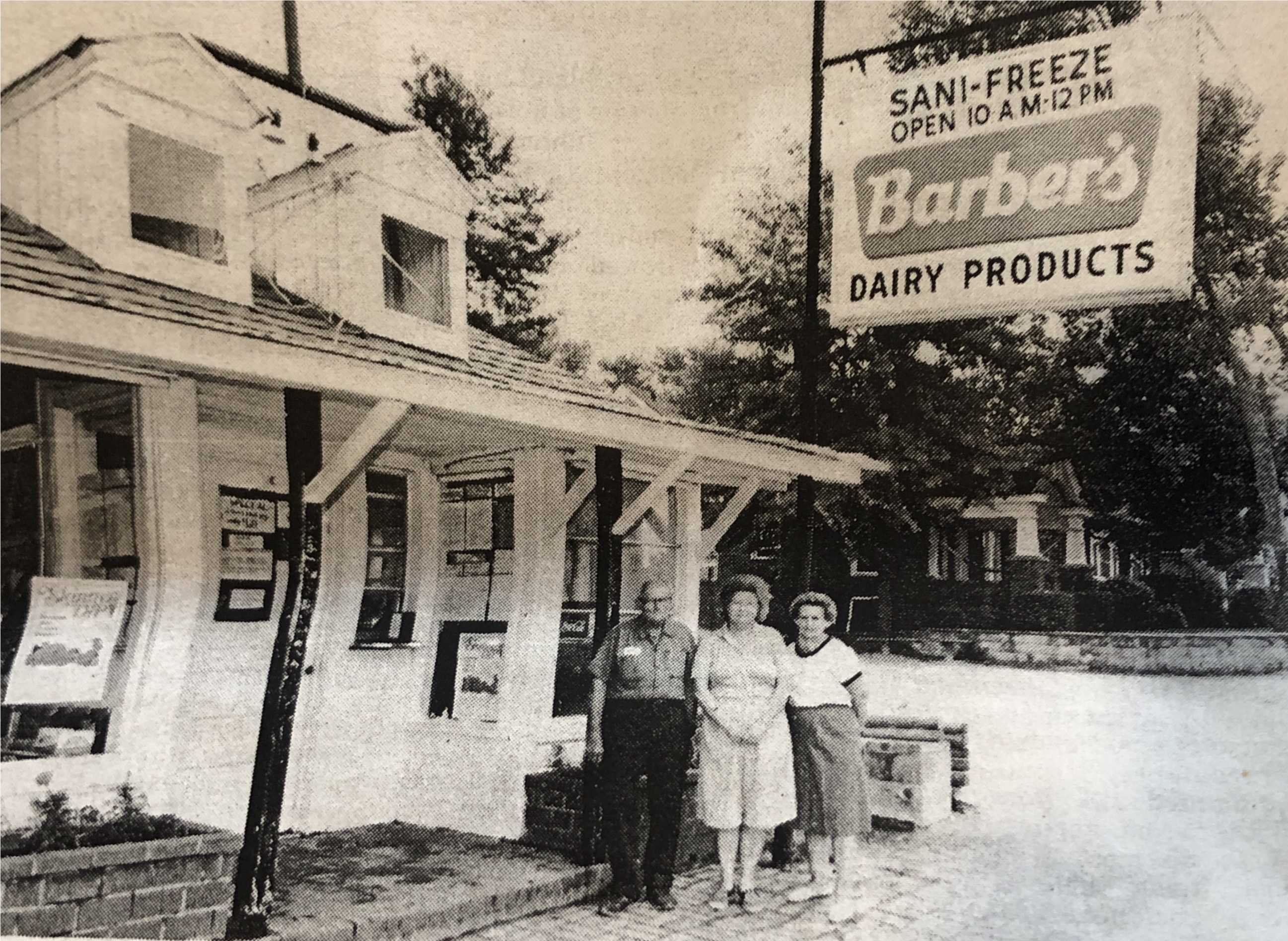 If you’ve lived in Auburn long enough, you remember The Sani-Freeze. Or, as it was more commonly known, The Sani- Flush, or The Flush. The Sani-Freeze was an Auburn staple. Located in downtown, it was perfect for students and citizens alike to grab a chili dog and milkshake on a date, after a baseball game or just to hang out after classes. 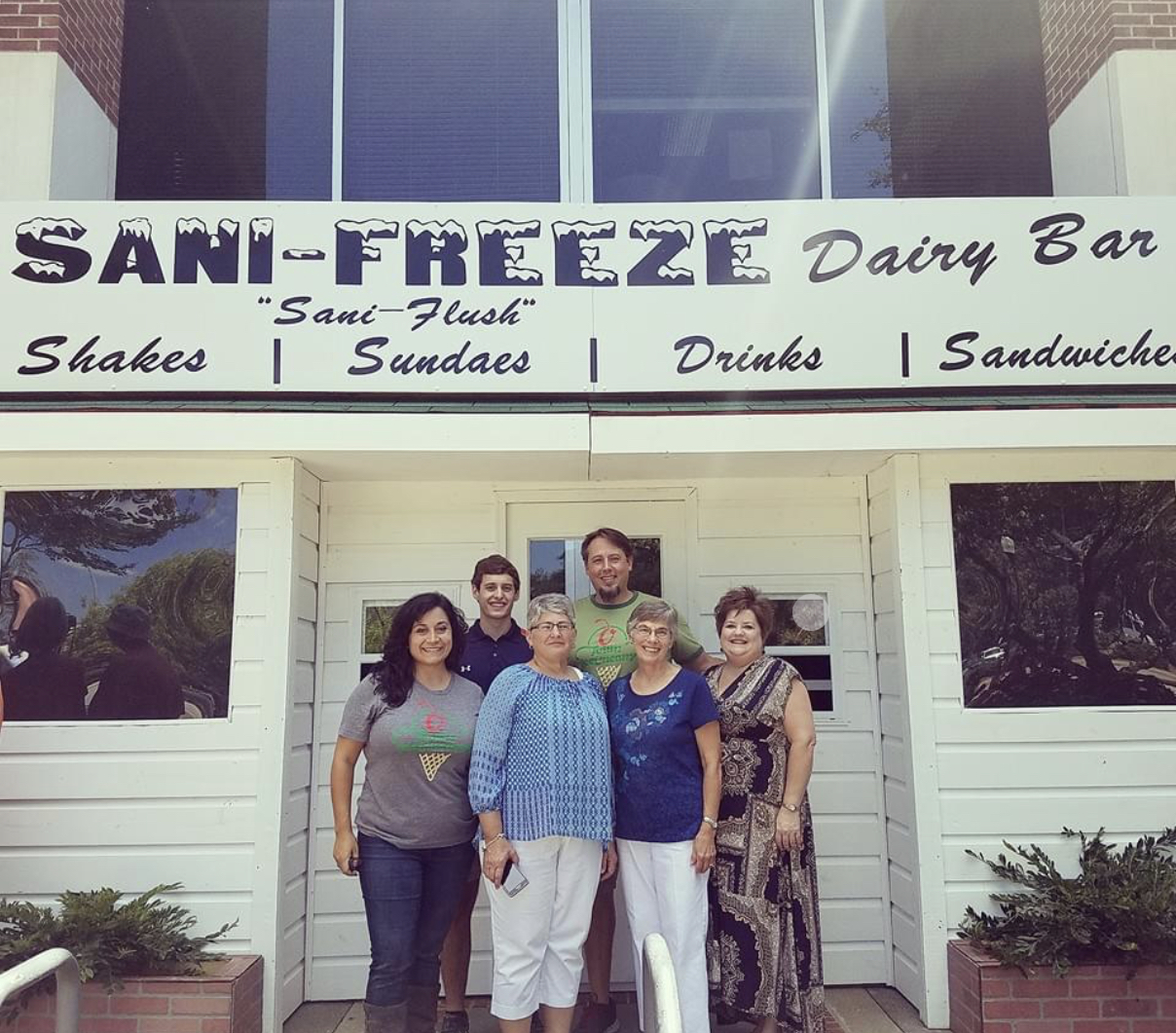 Bennie and Ethel Hunt opened the Sani-Freeze in1961. At the time, they had four children, Mary Hayes, who was in high school, Cheri Russell, who was in junior high, Bennie (Butch) who was about 5 and Billy, who was a new baby.

Russell said that her father was looking to just open a business to raise his family on.

“I went with daddy to go somewhere, and I don’t remember where it was, to actually a Dairy-Queen type place and we were there to run it for a few hours just for him to learn,” Russell said.

The name, the Sani-Freeze, actually came from a piece of machinery. The soft-serve machine was named ‘Sani-Serve’. 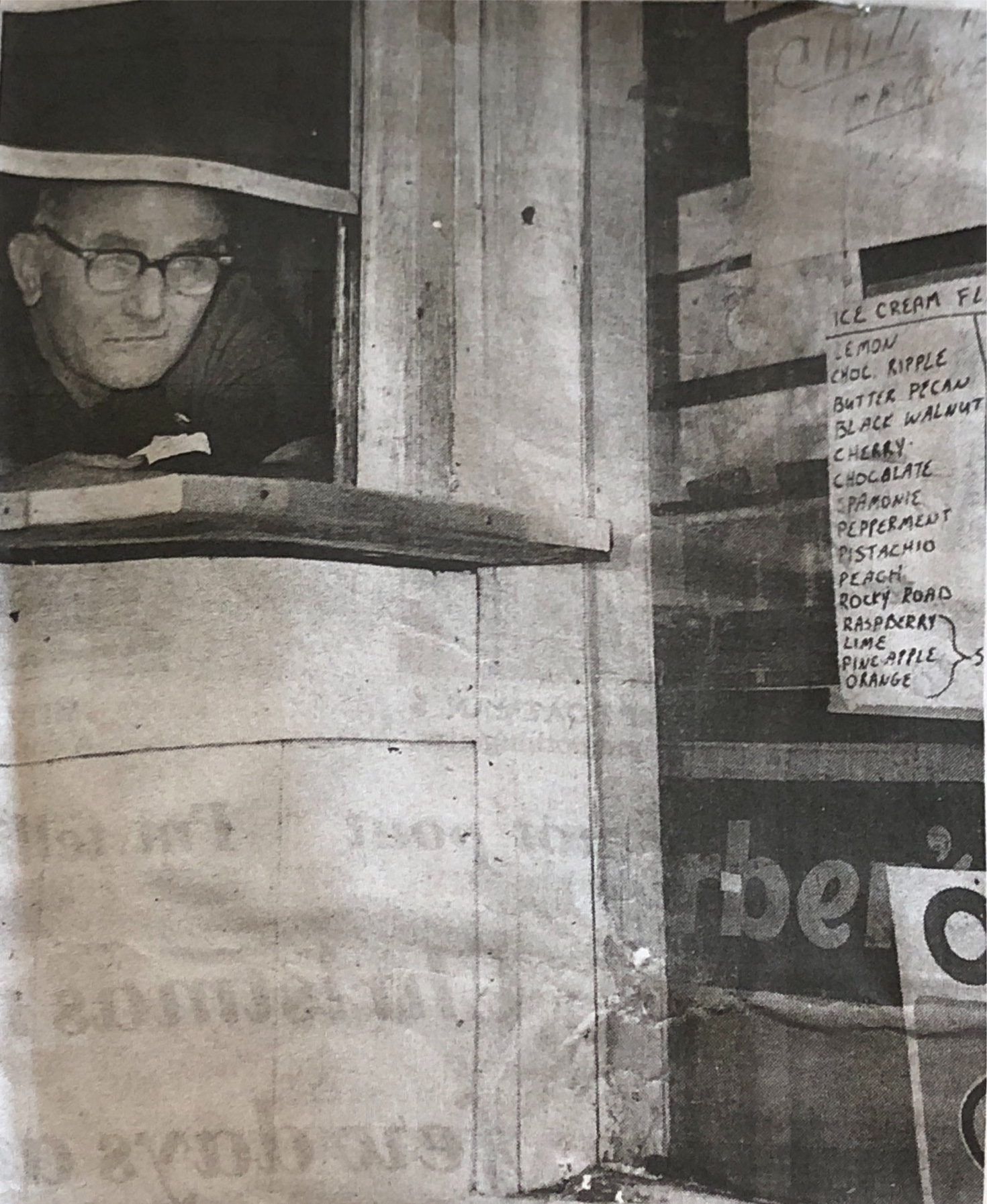 However, the nickname ‘The Sani-Flush’, was derived from a to
ilet bowl cleaner, likely coined by students. But Bennie’s children said he didn’t mind what people called the business.

“Later on when he had that sign made up on top of the building to have the menu on it, not the Barber sign, but the one across the top, he actually wrote down, had it down on the bottom, in parenthesis, ‘Sani-Flush,’” Butch said.

Opening a new business with four children, one of whom was a baby, meant that the parents worked a lot of hours, Russell said.

“Mother did all the cooking,” Russell said. “She made the chili. Because that is

one thing they were noted for was their chili dogs and it was made every day, several times a day.”

Butch said that Ethel would cook in the morning and attempt to make enough to make it through the business day.

“Daddy would get up, he would usually start about 4:30 in the morning,” Russell said. “He would go to the store and buy the meat and whatever else he needed and then she would cook it.”

Originally when the business started, it opened at 10 a.m. However, as the years went on, that moved to 11 a.m.

“They always had a really good lunch business, with the chili dogs, and they also had barbecue as well,” Hayes said.

There were items that Auburn residents will recall as special to the Sani-Freeze, such as Spumoni ice cream, which had pistachio, chocolate and a cherry layer; and the Upside Down Banana Split.

“We had people that would tell us that they were headed to Florida and they always came out of their way to go through Auburn and stop and get Spumoni on the way down there,” Butch said.

The Upside Down Banana Split was in a cup, with the ice-cream first and sliced bananas in a ring on the 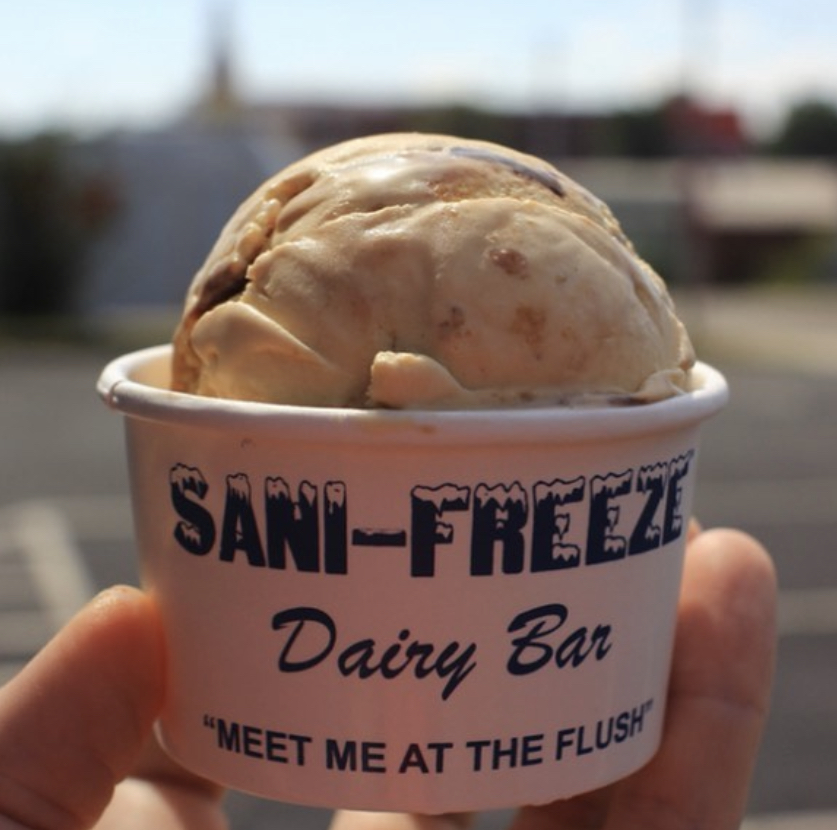 “They were really, really popular, and they looked neat too,” Butch said.

All of the children helped out at the Sani-Freeze when they were younger.

“I had morning classes [at Auburn University] and then, at lunch time, I would walk to the Sani-Freeze and help Mother … and then I would have another class a little later and then I would finish that and walk back,” Hayes said.

Russell attended Alabama Christian College in Montgomery [now Faulkner University] and would work at the Sani-Freeze on weekends.

The Sani-Freeze was a popular student spot. It was busiest between 8 p.m. and 1 a.m.

“Let me tell you a story that Mother always told about this young college boy that came,” Russell said. “She said one evening, there was this kid and he just kept walking around in front of the store, just kind of walking back and forth, back and forth, but he wouldn’t ever come to the window. And she said, finally she called him and she said, ‘Can I help you?’ And he dropped his head and everything and well, it was pledge week and he said, ‘I have an order.’

For a while, the Sani-Freeze changed ownership. 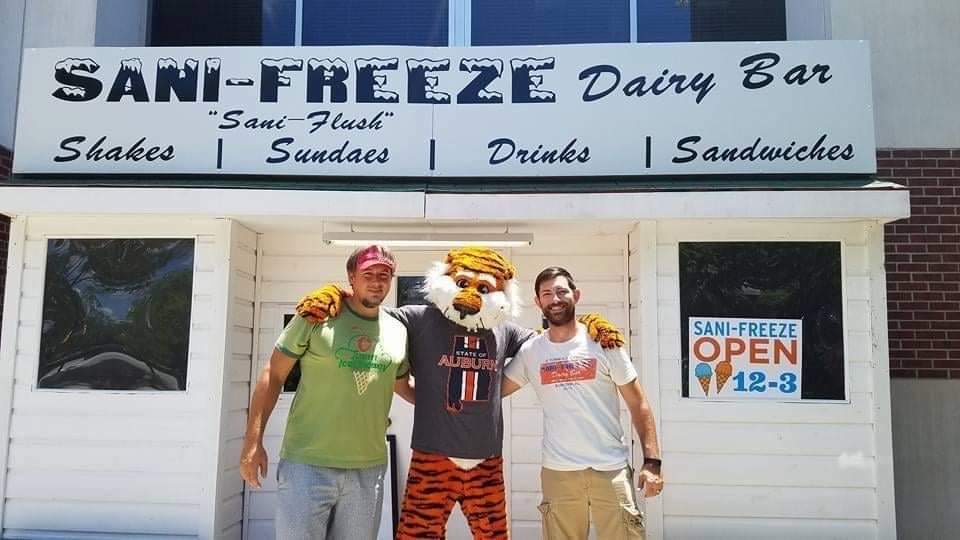 “[Bennie] sold it at some point, but he still worked there,” Russell said. “But then he took it back. And the reason he sold it, it was just too time-consuming.”

Both Russell and Hayes moved off to different cities following their graduations. But, Butch stayed in Auburn, and the Sani-Freeze eventually passed into his hands.

“The property was sold,” Russell said. “Because somebody else owned the actual property. Daddy owned the business but the property belonged to the Meager family.”

Bennie and Ethel had originally signed a 30-year lease.

“[The land selling] wasn’t ever discussed with us,” Butch said. “About six months before we found out about it, I had spoken to Mr. Meager and I had reiterated something I had said before that I didn’t know if we could do it or not but we would certainly appreciate the right to purchase the property, if he ever wanted to, if he ever wanted to sell it to anybody. He never said anything to me about it.”

Only Butch, out of the siblings, was able to be there on the last night the Sani-Freeze was open.

“We just stayed open as late as anybody was there,” he said. “There were students standing out there in their pajamas.”

The last few customers received their food for free that night.

“I hated it, because [the Sani-Freeze] was a part of my growing up,” Russell said. “That was just kind of part of your life, plus I have three daughters and when we would come, they got to go inside and get to have anything they wanted. I mean, whatever they wanted, they could have.”

Hayes said it was the same for her two boys. There were a lot of people who wanted to save the business and started a petition that ended up with signatures world-wide.

There was a slight revival of the business in 2016 with help from the Auburn Alumni Center and O-Town Ice Cream.

A replica store-front of the Sani-Freeze was constructed and placed in the alumni center where O-Town Ice Cream sold original Sani-Freeze flavors before football games. The stand was only available for one year, but despite being short-lived, it was a well received Auburn reminiscence.