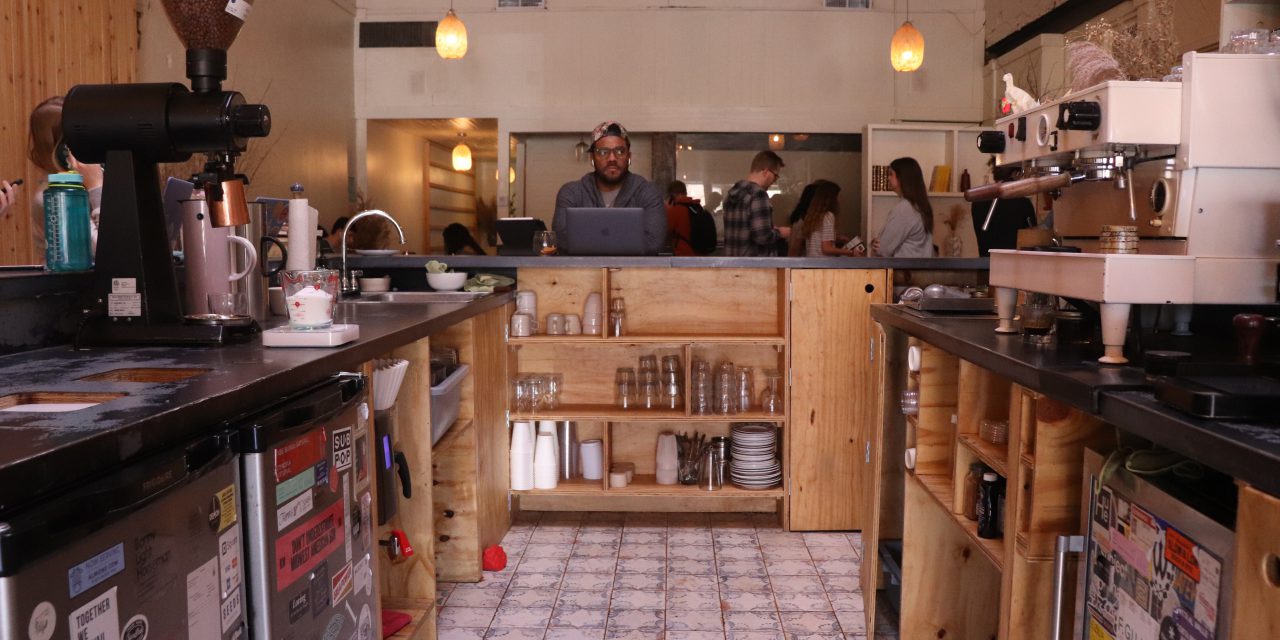 What draws you in to Side Track â€” the pay what you want model. What makes you stay â€” an environment where everyone is welcome.

David Bizilia grew up in Opelika. As he grew older, he watched his friends move away to bigger cities in search of opportunities, a bustling atmosphere or careers they didnâ€™t think theyâ€™d find in a small town.

And my heart and my feeling toward that, I saw all the really, really cool people when I was growing up, when I was young and I was like, â€˜those are the coolest people Iâ€™ve ever seenâ€™ and then they would leave. If that continues to be the case, then there will be no change â€¦ thereâ€™d be this lack of creation.â€

But Bizilia, he decided to stay in his home town and create something: Side Track Coffee.

A year after graduating high school, Bizilia was working at another coffee shop, which unfortunately closed.

Wade Preston, the owner of Prevail coffee, called Bizilia and asked if heâ€™d like to start a cafe in Opelika to fill the void.

The project was supposed to be short-term, Bizilia said.

â€œIt was through that summer that I changed a lot and changed directions of where my life was going and how I felt about creation itself, because I had never thought about opening a business before I got that call.â€

Fast forward to the end of the summer and Side Track was anything but short term.

â€œHaving a business is so lame,â€ he said. â€œThis is so lame if all I was doing was trying to get money.â€

Enter the businessâ€™ â€œpay what you wantâ€ model.

You can walk through the door and pop a dime down on the counter and get a coffee. Or you can hand them a hundred dollar bill. Or, you donâ€™t have to pay anything at all.

And Bizilia said he truly doesnâ€™t care how much a customer pays.

â€œWe wanted to show people that [they donâ€™t care what you pay] in how we live our life, and how we steward our money with discernment, and with care, and with love and with truth. Not only how we steward money in accepting it, how we steward it with giving it as well.â€

Anyone who pays at Side Track, any amount, is a part of the business, Bizilia said, but there is no obligation to pay anything.

â€œIf someone came up and they gave us $1,000 for a coffee and then someone behind them came up and gave a dollar, or zero dollars or something like that for coffee, we would look at both of those people the exact same,â€ he said.

Bizilia said he hopes the customers believe that he truly does not care what they pay.

â€œPeople are not a dollar amount. People are no sum of tangible things. They are a sum of eternal things. And hopefully we can offer people that chance to believe that, to have trust in that.â€

Because, the business is about the people.

â€œCommunity is a word I love to use, but itâ€™s also a buzzword too,â€ Bizilia said. â€œAnd I donâ€™t want it to mean that word. So, when I do use the word community, I mean everyone around us that works together, that is woven together, through relationships, through creating together, through thinking together, checking up on each other.â€

Side Track is designed like a home, Bizilia said. When you walk in, youâ€™re walking through someoneâ€™s front door.

â€œI feel like I walk in there and itâ€™s not a business,â€ Bizilia said. â€œLike, thatâ€™s not what it feels like at all. Thereâ€™s no agenda.â€

Part of the community is making sure that Side Track is there for its neighbors, he said. Not just the physical next-door neighbors, but anyone who walks through the door.

â€œI canâ€™t help my neighbor, truly, if I donâ€™t know who they are and know what their needs are,â€ Bizilia said.

Side Track does have plans for the future, but he said he wants to make sure that he keeps his eyes on the things that are important, not things that will fade.

â€œOwning a business, to me, is just super boring, but working with people, alongside people and business being a way to do that â€¦ is so exhilarating, and so much fun, and so hard and, oh my gosh, itâ€™s so refining.â€