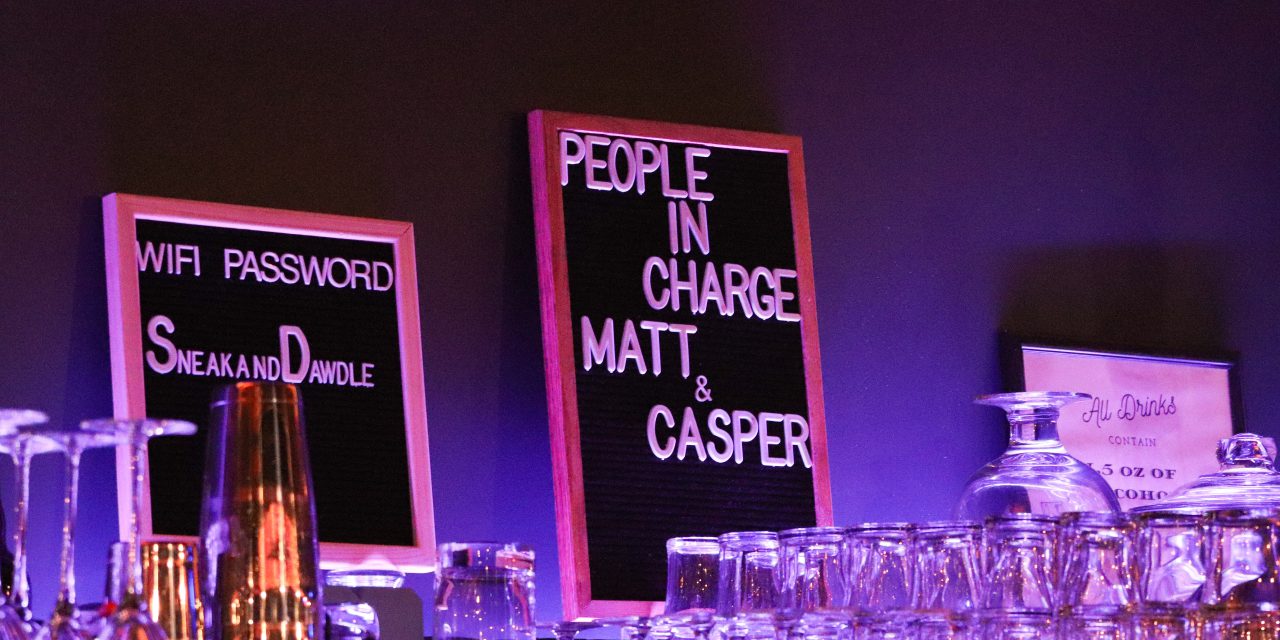 You could walk back and forth along First Avenue in Opelika and pass the door for Sneak and Dawdle without ever knowing it.

â€œSneak and Dawdle is kind of a secluded cocktail lounge located kind of like the outer edge of the historic downtown Opelika,â€ said Casper Obrzut, cocktail curator for Sneak and Dawdle. â€œAn area that, over the last two years, has been growing exponentially.â€

The Opelika speakeasy is hidden away, no sign on the door, no awning or patio seating. The bar must be found – and there is a little clue to give it away. If youâ€™re trying to find the joint, look for a bear on the door.

Sneak and Dawdle opened New Years Eve 2019, so theyâ€™ve been in business over a year and a half.

Matthew Poirier, who owns Sneak and Dawdle, also owns The Hound and The Depot, two local Auburn restaurants, so a bar was the obvious next move.

â€œThere are plenty of places for the kids to drink, not a lot of places for the adults to drink,â€ Poirier said. â€œAnd I definitely cater to all who are of legal age, but I wanted to give a place for people to lounge and have a drink thatâ€™s not packed with students.â€

He was inspired by a couple of other speakeasies, some as far as San Fransisco and others as close as Birmingham.

You may not need a password to enter – but you may struggle to find the door.

â€œPeople ask where it is, we just say, look for the bear,â€ Obrzut said. â€œStanding outside sometimes, I see people going back and forth. People like kind of the secluded aspect of it, but itâ€™s not in the traditional sense of a speakeasy where you have to look for a telephone booth or slide open some laundry machines.â€

Although perhaps not a traditional speakeasy, Sneak and Dawdle brings a unique vibe to downtown Opelika.

â€œItâ€™s got a different feel when youâ€™re in there,â€ said Matthew Casey, general manager of Sneak and Dawdle. â€œI donâ€™t feel like Iâ€™m in Lee County â€¦ when you walk in there, youâ€™re kind of leaving the world behind and youâ€™re kind of in your own little world.â€

Sneak and Dawdle is surrounded by bars – Avondale Brewery, John Emerald Distillery, Resting Pulse Brewing Company and more, so the speakeasy needed to find its own niche, Obrzut said.

â€œKeeping up with all the trends, the bar trends and everything, and making sure that weâ€™re coming up with something new,â€ he said.

The bar tries to keep things unique with its cocktails, Obrzut said.

â€œItâ€™s not all Bud Lights and Jack and Cokes,â€ Casey said.

A customer can come in and try something theyâ€™ve never had before.

Of course, creating new cocktails is difficult because so many are already out there, he said. So taking a classic and putting a spin on it is almost like creating something new.

â€œThereâ€™s a lot of places in town that they make very, very good cocktails but they donâ€™t go to the lengths that we do, with creating these intricate syrups from scratch, and making sure that all of our fruit is fresh and not keeping certain juices for longer than a certain period of time,â€ Obrzut said. â€œâ€¦ Just caring about the actual product.â€

The fresh fruit makes all the difference, the two said. In fact a lot of customers arenâ€™t even sure what juices they really like because a lot of what theyâ€™ve tried hasnâ€™t been fresh before, Casey said.

â€œAlways have fresh juice, if we can get something and squeeze it, weâ€™re going to do it,â€ he said.  â€œI mean, about the only thing we donâ€™t actively [keep fresh] is cranberry juice and pomegranate juice because itâ€™s kind of a pain. But fresh pineapple juice. Weâ€™ll do blackberry purees, now with the infusion laws weâ€™ll infuse our own, make a peach schnapps. Weâ€™ll make a limoncello. Just doing everything in house, by hand, as much as we can just makes everything taste a little better.â€

For instance, at Sneak and Dawdle, if you order a pineapple pina colada, itâ€™s going to be much better because the juice is fresh, Obrzut said.

Fridays and the weekends are the busiest days for Sneak and Dawdle. There is the before dinner crowd and the after dinner crowd.

The bar will also host events with other businesses in the area. Before the pandemic began, Sneak and Dawdle hosted a popup with The Depot and with The Hound where the chefs would come in with their food and guests could get a taste of the bar and local restaurants, Casey said.

â€œThereâ€™s just people that you would never expect, you see walking down the street and expect that theyâ€™re a regular at a bar,â€ Obrzut said. â€œAnd I feel like everybody in Opelika is my regular. Itâ€™s very rewarding to have someone walk into the bar and you recognize them and them not even have to say anything and their drink is already in front of them.â€

Casper said its rewarding to have customers watch him do his work, making drinks.

â€œSay that we smoke a glass, we light the wood chips on fire, we put the glass over it to start smoking and thereâ€™s a guy looking at that and then all of a sudden he yells, he goes â€˜Brad, come here, you need to see this,â€™â€ Obrzut said. â€œItâ€™s like, you know, it just makes me smile. And then you have to do it again so Brad can see.â€

Poirier said that he trains his staff to be the server or bartender a customer needs.